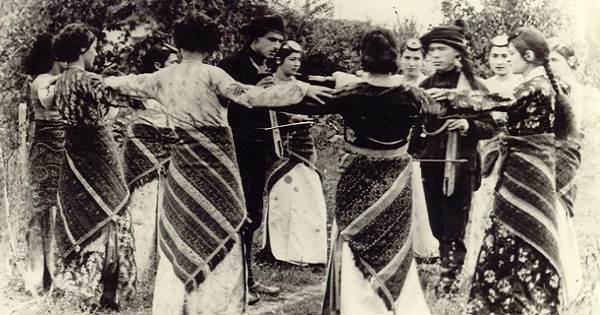 The Kotsari, Kotchari or Kochari, (Grk: Κότσαρι) is a popular dance amongst Pontic Greeks second only in popularity to the Serra. It was danced in the eastern regions of Pontus such as Argyroupolis, Bayburt and primarily by the Pontic people of Kars. It was also danced in the Upper Matsuka region. The dance was introduced to the Upper Matsoukans in the last decades prior to the Exchange and it's sometimes said that the Matsoukans learnt the dance at the festivals of Panagia Sumela from worshippers who originated from the home of the dance, ie those from the easternmost regions of Pontus and the Caucaus.

Its name is derived from the manner in which it's danced and in particular the 2 limp movements (the first 4 steps of the dance), which are executed with synchronous stepping of the heel (the kotsi) on the ground. In Greek, the word koutso means limp, and the heel of the foot is called the kotsi (pl. kotsia).

Another explanation of the name is that it describes the manner in which the legs-knees are shaken and locked by metatarsal movement. The dance relies on powerful foot movement/limps and hence it's the dancer's feet which keep the dancer upright. Whilst the above descriptions are considered arbitrary another explanation is that it was named after an anonymous dancer by the name of Kotsari (or Konstantinos) although this explanation does seem unlikely.

The Kotsari belongs to the family of straight step heel dances which rely on heel steps. Such dances also exist in Greece, the Aegean islands, Crete and generally amongst the races of Asia Minor since Ancient times.

It's a double rhythm fast dance similar to the Susta dance of Rhodes and the Maleviziotic-Castrino dance of Crete. The dancers hold each other at the shoulder in a circle but more commonly in a semi-circle. There are 8 steps in the dance which are broken down into 2 parts. The first 4 movements are the 2 on the spot jumps, in other words the limp steps of the left heel - this is the first part of the dance. The next 4 steps are basic ones and move the dancer towards the right.

The dance started off as a male only dance. Some researchers have classified it as a mountain war dance. Later it became acceptable for women to dance it also.