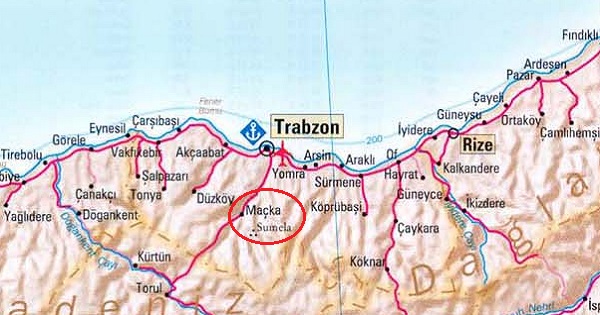 Matsouka (Gr: Ματσούκα, Tr: Maçka) is a region in the province of Trabzon in Turkey. Its capital is a town of the same name; Matsouka, otherwise known historically as Tzevislik (Gr: Τζεβισλίκ). Matsouka is spread over the south of Trabzon, reaching up to the Zygana Pass (a mountain) and the Kulat Dag. The region spans 60 km in length and 30 km in width. The Pyxites River runs directly through it. Prior to 1914, the region comprised 38,000 Greeks of which only 17,000 managed to flee to Greece following the Greek-Turkish Exchange of Populations (1923). The remainder were either massacred by Turkish chetes, died on death marches, or escaped to neighboring southern Russia.

Matsouka was made up of 70 villages, 47 of which were purely Greek, 9 were mixed, and only 14 were Turkish. Combined with the villages of neighoring Santa, Matsouka made up the ecclesiastical province of Rhodopolis, with Livera as its see. Three of the most prominent monasteries of Pontus; Sumela Monastery, Ioannis Prodromou of Vazelon , and Saint George Peristereota were all situated in Matsouka. Prior to 1903, these 3 monasteries were under the direct jurisdiction of the Ecumenical Patriarchate, until the Diocese of Rhodopolis was formed.

During the rule of the Comnenes, Matsouka existed as an olbandok. Earlier it was a bandon of the Chaldian theme. Following the fall of Trebizond (1461), the Matsoukans didn't adjust easily. In one report, on one particular Friday, Muslims were gathered at their mosques in Trebizond, and the Matsoukans entered the city armed, and at one stage took control of the centre of Trebizond. Later, the region was under the jurisdiction of Maçka and belonged to Trebizond. One of the most legendary castles of Pontus was located on the cliff at Zavera. According to legend, it was violently raided and disbanded by the Turks as described in the following song.

It's worth noting that from the mountain Thichis (Grk: Θήχης) in Matsouka, Xenophon's ten thousand cried ‘Thallatta Thallatta' (The Sea, The Sea!) when they saw the Euxine (Pontus) Sea. 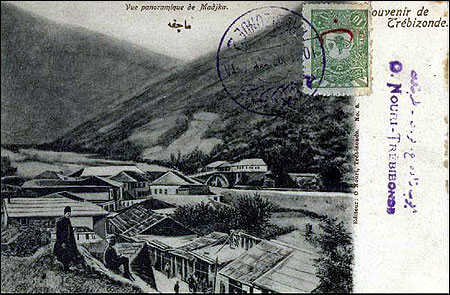 During the Byzantine period, the region was the base from which the Empire's guards protected its eastern frontier. In the mountain ranges of Kulat Dag, Zygana, Thichis and Aeser lived the infamous Gabrades warriors and later the troupes of the Comnene Rulers. After the fall of Trebizond, many people fled the capital of Pontus and settled in Matsouka, thus increasing its population drastically. During the difficult period for the Christians (15-16th century), the residents were well behaved and disciplined, and large scale islamization didn't occur in the region. Another reason for this phenomenon was the presence of the Sumela, Bazelon and Peristereota monasteries. Apart from these 3 (male-centric) monasteries, there were also 2 female functioning monasteries: the Monsatery of Panagia Kremastis, and the Monastery of Saint John. Matsouka was also home to a further 64 Parish churches, and 225 chapels (both old and new). Just prior to the Exchange (1923), there were 3 philanthropic educational brotherhoods and 2 charitable brotherhoods in the region.

The majority of Matsoukans were cattle-breeders and farmers. Very few undertook more skilled labor. Migration was primarily to Russia and Constantinople, and the majority of those who immigrated did so to avoid being drafted into the army. Women were very active in cattle farming and work in general, especially keeping the mountain plains in good order. 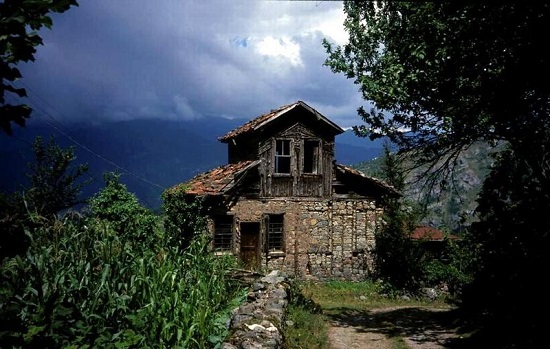 Each village had its own administration. Once a year, the men would meet at the village school and select a president for the village (the mouchtar), and also an administrative committee (the azathes). The notables of the village were responsible for collecting taxes and putting them to good use. The notables also had legal responsibilities such as solving matters relating to inheritance, as well as disciplining those who didn't respect their decisions. They also selected the committees of the schools and churches.