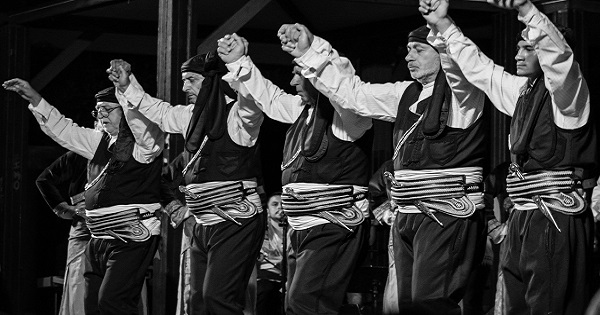 The Serra is a war dance of the Pontic Greeks. It's also referred to as the Pyrrichio or Lazikon. In Turkey, in the Karadeniz/Pontus region where it is still danced, it is called Horon or Horonu.  It's believed the name was derived from the river Serra which is situated west of Trabzon. The ancient origins of the dance can be proven as the dance moves resemble those of the ancient Pyrrhic dance. In the periodical Pontiaki Estia (1956, 4th edition, #76) Mouzenidis states that the Serra is a dramatic dance and analyses it as follows:

Firstly the dance comprises 3 parts. In the first part the dancers who are characterizing the people (laos) as a whole, hold each other by the hand and with arms raised begin to dance slowly with a mood of joy expressed on their faces. Gradually the dance moves into the 2nd part. Joy turns to unease and the dancers' bodies increase intensity their hands moving rhythmically forward and then backward attempting to keep their bodies upright so as not to fall. At this point the dancer is trying to mimic an injured fighter trying to cling to life and to win. And although the body is leaning over, small energetic and sudden movements show the wounded fighter is trying to survive. In the 3rd phase redemption arrives. The dancer's body which was bent over and almost touching the ground gains strength and the dancer begins to jump with his legs spread wide apart and his body becomes erect like a column and his head is held up with pride and looking upwards.

..the dance wasn't actually danced but was a sequence of movements due to Greeks being banned from using firearms. When the firearm ban on Greeks was lifted in the 3rd and 4th decade of the 19th century the Serra began being danced as it used to. Its second name Lazikon is derived from the Laz inhabitants of Of who were not Turks but indigenous Pontic Greeks. The Lazikon was danced exclusively in the regions of Platana, Trapezunta, Matsuka, Tonya, Rizaion, Of, Kromni, Argyroupolis, and Garasari. Sometimes the dance varies slightly from region to region. Other names of the dance include Ofitiko, Sarakostiano, T'ardassino and others.

K Papamihalopoulos in his work titled A tour of Pontus (1904) wrote the following about the Serra after touring the region and seeing the dance in person:

It is a war dance characterized by directional body movements by dancers that are joined tightly together. The dance consists of violent movements of the body, strong foot taps on the floor, contractions of body muscles, an enthusiasm and cheerfulness that grips the dancer, and a spark which transmits emotion. A dance identified by its originality and splendour of a group which quite rightly classifies it as one of the most famous dances in the entire world.

The Pyrrhic Dance
The Pyrrhic dance, which the Serra is based on, was an armed dance of ancient Greek origin. The exact steps are not known but the movement was definitely quick and combat-like. According to Strabo the origins of the dance and also its name comes from the contorted movements in the death of Achilles' son Pyrrhus as described by Euripides in Andromache.

A more likely argument is that the Pyrrhic's birthplace was in Crete due to its association to the myth of the Curetes guarding infant Zeus with warlike movements and noises of clashing swords and shields.

By 1250 BC the dance was widespread in Crete, mainland Greece and Asia Minor. It is mentioned in the Iliad (8th century BC) where it's suggested the name derives from pyra (pyre) or pyr meaning fire.