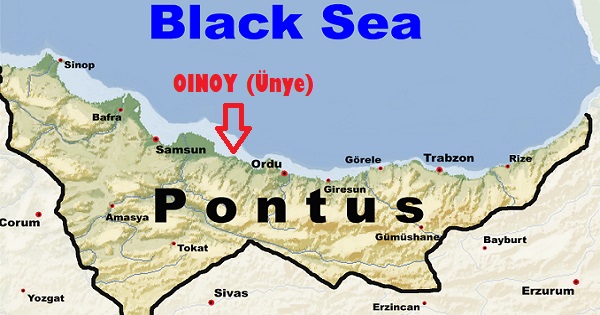 Oinoy, otherwise spelt Oenoe (pronounced Enoy) today Ünye, is a coastal city in Pontus situated between Ordu and Samsun. It's believed the city was founded in the 5th century BC. According to Pontic native D.I Oeconomidis, Oinoy was also the seat of a sub-district of Pontus. Under the Comnenos Emperors it came to prominence virtually existing as its own hegemony. Under Turkish rule the residents suffered a lot, in particular by Turkish demands but also by raids from Laz pirates. During one raid in 1806, all the residents fled to Sinope, Russia and the Caucasus. Those that fled to Sinope returned a few years later. In 1838 the city was completely destroyed by fire, and 1.500 Greek homes were burnt to the ground. In 1914 the city had a population of around 10,000 of whom 2,500 were Greeks, 1,000 were Armenians and the remainder were Turks. The Greek community ran two mixed schools and a girls' school. There were two parish churches in the city; Saint Nicholas and the Holy Trinity Church. The Armenian residents were exterminated in 1915 while in 1916 Ottoman forces took 520 Greeks hostage and at the same time attacked armed Greek guerillas that had fortified themselves at the village Keris. After the guerillas escaped, Ottoman forces killed the hostages and burnt their villages. In 1917 the Greeks of Oinoy were deported to the interior to places such as Tokat, Sivas and Amasya where the majority perished from hunger and cold. The few that survived were expelled to Greece.

This list of the Greek villages of Pontus (or villages where Greeks resided) was compiled by the Center of Asia Minor Studies (Κέντρο Μικρασιατικών Σπουδών) which is based in Greece. The list may exclude some villages which weren't known at the time the study was completed. Source: The History of Pontian Hellenism, Christos Samouilidis, Thessaloniki 1992.

Map below is hosted by an external source.