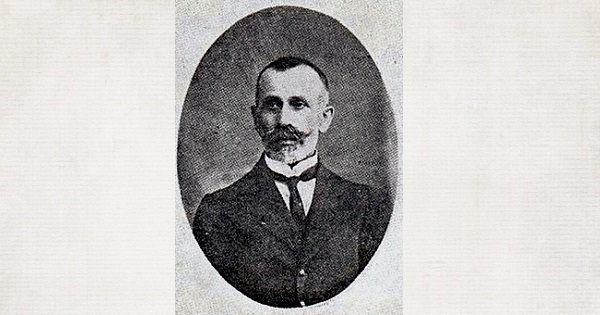 Dimosthenis Oeconomidis was one of the most distinguished researchers of Greek linguistics and folklore, and in particular the linguistics and folklore of Pontus. He was born in Argyroupolis (Trk: Gumushane), Pontus in 1858. His father was also born in Pontus but originated from Chios. Following the destruction of Chios by the Ottoman Turks in 1822, his grandfather Dimosthenis Oeconomidis was sold along with 40,000 other Greeks into the slave trade of Anatolia.

Pontic Greeks bought him and took him to Pontus where he worked as a financial administrator for the family which had saved him. This was the reason why he was named Oeconomidis; from the Greek word Economia which means economy.

Dimosthenis Oeconomidis had a thirst for knowledge. His life was dedicated to research and writing and his personal motto in life was ‘the most complete biography of a man is the study of his own research'.

Due to the family's poor financial position he walked for days with his father (three whole days) to enrol in the Trapezunta Tuition Center. When he graduated he entered the Phanar Greek Orthodox College also known as the Great School of the Nation (Grk: Μεγάλη του Γένους Σχολή) at Constantinople where he was under the guidance of scholar Gregory Palamas. Under the guidance of Palamas, Zannis and Paul Stefanovic he transferred to Munich and Leipzig where he studied Greek and Latin and the history of philosophy. His doctorate dissertation was ‘The phonetics of the Pontic dialect'. His dissertation was judged excellent by the University of Leipzig and he was awarded by the Kurt Institute.

In 1887 he acquired his doctorate and the following year started lecturing in Latin and later in Greek at the Phanar Greek Orthodox College. He remained in this position until 1914. At the same time he also lectured at the Ioakeimio Girl's school at Fanari and the Zografio High School at Pera.

In 1885 his love of his homeland Pontus along with his appreciation and devotion to its linguistics inspired the young academic to journey to Pontus and in the process amassed a priceless collection of linguistic and folkloric material which served as the basis for his later academic work.

Some of Oeconomidis' works include:

He also wrote many instructional, educational, and pedagogical pieces.

Source:
- The encyclopedia of Pontian Hellenism. (Translated to English by pontosworld.com)