The Church of the Cross of Honour (Timiou Stavrou), Dirlik Koyu, Sürmene 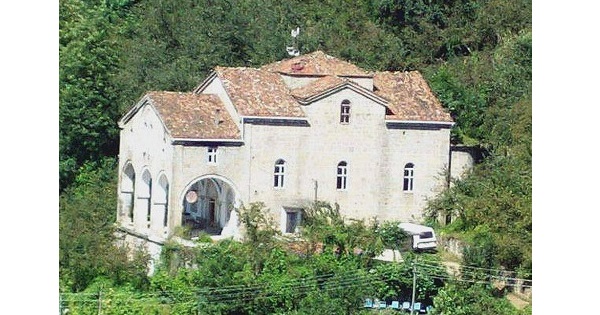 The church of the Cross of Honour is a 19th century church built in 1891 during the reign of Metropolitan Gabriel Iatroudakis (1889-1893). A remarkable feature of the church is a stone balcony or women's gallery. In the east vault of the naos was a painting, now covered, of the Mother of God enthroned with the Child on her lap.

Tzita was one of the larger villages in the Sürmene district. It was built east of the Micropotamos which was a river that ran off the larger Monahos Deresi. Prior to the Exchange, it consisted of 350 families and had its own four grade primary school as well as two churches; the Metamorphosis of Sotiros and the Church of the Cross of Honour (Timiou Stavrou, pictured). The Church of the Cross of Honour was built on the site of a demolished church.

The inhabitants of Tzita were primarily builders, copper-smiths, steelworkers, and carpenters. During the pogroms of the 17th century many of its residents fled to the region of Gümüşhane, where they founded a new village and named it Tzita. At this new village, they built a new church and named it Metamorphosis in memory of their church at Tzita in Surmena.

The Surmena (Sürmene) district: The valley of Sürmene which was a bandon of the Empire of Trebizond had a continuous Greek presence until modern times. Kiepert estimated 1,600 Greek households in the valley, Chrysanthos estimated 850 families, 11 churches and 10 schools (excluding Sourmena itself) and Archimandrite Abraam Papadopoulos (a local) estimated 8,260 households in Surmena and 25,000 in the district (3,000 Greek and 500 Armenian).

References:
The Encyclopedia of Pontian Hellenism. Malliaris Paedia.
The Post Byzantine Monuments of the Pontos. A Bryer and others. p133-142.