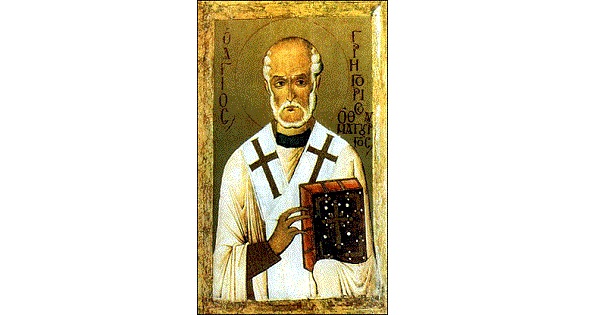 Saint Gregory of Neocaesarea, also known as Gregory Thaumaturgus, Gregory the Wonderworker or Father Gregory, was born at Neocaesarea (Tr: Niksar) in Pontus about the year 214. His parents were pagan. His mother who was a widow, made sure that her three children received the best possible education. Gregory, who was then called Theodore was very studious especially in rhetoric and also very meek. At that time, Neocaesarea only had 17 Christian inhabitants. The rest were pagans.

When he was fourteen, Gregory preferred not to associate himself with the noisy games of his friends. He preferred the chaste and contemplative way of life. His friends out of jealousy, paid a prostitute to spread the news that Gregory had contact with her. When Gregory heard what the prostitute was saying, he did not protest his innocence nor become angry with his friends. He decided to give the woman the same amount of money to leave him in peace as she had already received for telling lies about him, and sent her away.

Theodore's mother decided to send him and his brother to study at the famous law school of Berytus, but first they had to take their sister to Caesarea in Palestine. At Caesarea they met Origen of Alexandria (famous theologian ). They became his students and were baptized. They avoided some of the errors of Origen's teachings concerning the mysteries of God.

When he returned to Pontus, many families approached him and asked him to be a tutor for their children. Gregory wishing to avoid worldly attractions, fled into the wilderness to live alone before God in ascesis and prayer. Faidimus, who was Archbishop of Amaseia wanted to make Gregory Bishop of Neocaesarea. He was well aware of Gregory's virtues. Gregory refused to leave his retreat and return to the world. Faidimus then took the unusual step of ordaining him in absentia (without the laying on of hands) and informed Gregory in letter that like it or not, he was now Bishop of Neocaesarea. Gregory, who was now thirty years of age had to obey the will of God. He spent many days and nights in prayer to gain the necessary strength for his new role as Bishop.

One night, the Holy Theotokos and Saint John the Theologian appeared before him and revealed to him the mystery of the unity of the divine Nature and of the distinction of the three persons of the Holy Trinity.

During his pastoral ministry, Gregory was a tireless apostle of the true Faith in all the region of Neocaesarea. Many people were converted by his words and by his miracles which showed that the power of God was with him, and he soon became known as the 'Wonderworker'.

In 250, during the violent persecutions of Decius, Gregory and many faithful decided to flee to the mountains near Neocaesarea to risk unnecessary death. From his mountain refuge he prayed for the Martyrs. At the end of the persecution, he had the relics of the Martyrs collected, and instituted solemn feasts in their honour on the same day that pagans were involved in revelry. Thus the whole region became Christian and the pagan customs of the people were transformed into spiritual rejoicing.

St. Gregory remained a burning and shining light in Neocaesarea through his miracles and preaching of the Orthodox Faith. In the year 275, he asked his relatives how many pagans remained in his diocese. They told him there were no more than seventeen, exactly the same number as there had been Christians in his youth. Soon he fell asleep in the Lord. May God give rest to his soul. His feast day is commemorated on November 17.

References
The Synaxarion. The Lives of the Saints of the Orthodox Church , Volume 2,
Holy Convent of the Annunciation of Our Lady Ormylia (Chalkidike) 1999.