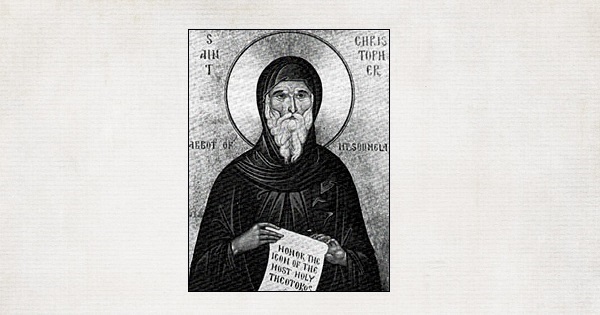 The life and struggles of St. Christopher of Trebizond, builder of the Soumela Monastery whose memory the Holy Church celebrates on 18th August.

St. Christopher was born in the village Gazaree of Trapezunta (today Trabzon) in the region of Pontus. He was a farmer. Once while Christopher was cultivating his land with a pair of oxen, Panagia appeared to him. Our Holy Mother said to him, "O child, Christopher, rise speedily and stand on thy feet". Christopher fell to the ground upon hearing the voice. Panagia then took him by the hand and helped him up. Panagia continued by saying "Understand what I shall tell you O Christopher. You are a Christian who confesses Christ and His Mother."

Christopher replied to her by saying, "Yes, my Lady, I confess and adore Christ and you O Lady Theotokos". Panagia then said to Christopher, " I desire that you leave the farm life and become mine. You are to go to Mount Mela. Once there, you will renew and revive my imperial home. Thus leave the oxen and plow in the field. Show yourself before the bishop and reveal to him all that I have told you and say to him that he is to ordain you to the priesthood". When Christopher heard this he said to Panagia, "How can this be. Not only am I unworthy to become a priest but I also am illiterate?". The Theotokos replied, "Obey and do not contradict my will. Do as I command you to do, and as to being illiterate, I shall provide". Immediately then Panagia vanished.

Without wasting any time, Christopher left, and that evening he slept on the road. Meanwhile, Panagia appeared to the Bishop of Trebizond and said, "Do you know who I am?" The bishop answered, "I know you to be the Mother of Life and of our Lord God and Saviour Jesus Christ". Panagia then replied, "Then accept what I shall instruct you to do, and make sure to carry it all out. Today a man shall come to you. He has six fingers on his right hand. Ordain him as a priest for my monastery at Mt. Mela where he is to be sent immediately." After uttering her instructions she disappeared. The following morning, the bishop told his fellow priests the vision he saw of Panagia.

After the Divine Liturgy, the bishop saw Christopher who was dressed as a farmer approaching him. Christopher bowed before the bishop and showed him his right hand. The bishop then turned to the faithful Pontians gathered in the Church saying, "Behold my children, it is he who Panagia revealed to me while asleep". The next day the bishop took Christopher and ordained him as a deacon. On the third day, he ordained him to the priesthood. He gave him priestly vestments, the words of the Divine Liturgy in a manual and the holy Bible. Soon Christopher was granted leave to depart in peace.

Christopher then returned to his farm and found his animals chewing the cud. He then saw a dazzling light and knew that the Theotokos had appeared again to him. He then heard her say to him, "It is good that you have come, my child, Christopher. Have you performed all that I have told you to do?" Father Christopher answered, "As you have commanded My Lady, all has come to pass!" Panagia then said, "Bring forth the items that you have in your hands". He then showed her the priestly garb, the manual of the Liturgy and the Bible. The Theotokos said to him, "Now that you are vested with the grace of the priesthood, lead your animals to your house. Then go to the village of Kouspida. Walk along the river following its upper stream. Soon you shall come to the mountain where I reside (Mount Mela). After you arrive at this sacred place, I shall show you what you must do". Thus St. Christopher was guided by Panagia and never lost his way. Soon he entered into a cave. Upon entering this cave he found the Church dedicated to the Theotokos. He glorified God and embraced the sacred icon of Panagia Soumeliotissa.

As it was the hours of Vespers, Christopher put on his priestly vestments and sensed the Church. At one point, Christopher was sad because he couldn't read the services. Panagia then appeared again to the Saint, took up the Bible into her hands and gave it to him saying: "Read, O priest Christopher. May the grace of Him who was born of me, through me, enlighten you". Immediately a miracle occurred. Christopher opened his mouth and read very easily (he who did not even know the alphabet!). Panagia then said, ‘Know that all is possible in God". Panagia then said to him, "Do not doubt anything, keep this mystery hidden. Liturgize as much as you are able in my sacred house. Always chant the Trisagion at Matins and Vespers over the holy relics of my servants (Saints Barnabas and Sophronios) who shall look after you in times of need so that you may not grow weary from many labours. Know that I am with you, to help you and all those that abide to the end, in this place which I have chosen". After these words were uttered, she disappeared. This divine experience had truly transformed Christopher. He advanced in virtues and received the gift of prophesy. He received so many gifts that he was able to recite by heart the entire Bible.

Very soon many other men came to join him in the monastery, and the monastic brotherhood grew. After many years, Fr. Christopher contemplated his departure. Thus, he gathered the monks of the monastery and gave them instructions regarding the spiritual life. He then asked for forgiveness from the monks. After uttering these words, he entered the cemetery and gave up his soul into the hands of God. After the monks performed all the memorial services, they elected a member of their brotherhood as the new abbot who with the grace of God was able to emulate all the virtues of St. Christopher. The feast day of St. Christopher is commemorated each year on August 18.

Reference
The Lives of the Monastery Builders of Soumela, A translation from the Greek of THE GREAT SYNAXARISTES OF THE ORTHODOX CHURCH, Holy Apostles Convent , Colorado, 1991.