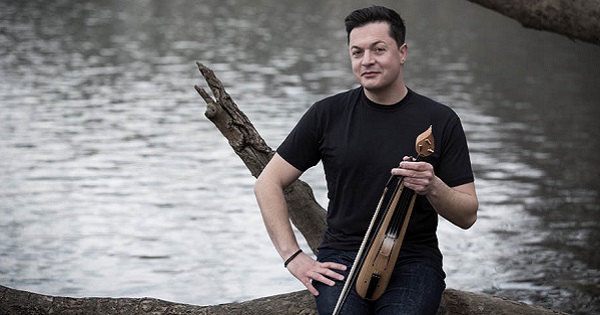 Matthaios Tsahouridis. Source
Matthaios Tsahouridis is widely regarded as the finest contemporary exponent of the Pontic lyra. He was born in Veria, Greece and grew up in a fertile musical environment. At the age of 9 he began making his mark as a perceptive performer and a competent interpreter of music. Although he plays a number of instruments, the Pontic lyra is the instrument which expresses his deep-felt devotion and respect for the music he loves.

His proficiency and accomplishment in playing traditional musical instruments has led to many accolades. In 1996 he won first prize in a Pan-Hellenic music competition organized by the Greek Ministry of Education at the Athens Concert Hall (Megaron Mousikis) while in 1997 he was awarded a scholarship by His Eminence Mr Panteleimon and the Holy Metropolis of Veria to continue his music studies in London.

By 2001 Tsahouridis completed his Bachelors in Music Studies and his Masters in Ethno-musicology at Goldsmiths College, London and in 2003 he was awarded a scholarship by the Michael Marks Charitable Trust for his Doctoral research in the field of Performance Practice. In 2007 he attained a PhD in Performance Practice from Goldsmiths University (titled: ‘The Pontic lyra in contemporary Greece'), the first PhD in the U.K. referring to the performance of non-western music cultures.

In 2005 he won the Arts Foundation Fellowship Award of Britain as the best UK based instrumentalist working in a non-western musical tradition. He has also performed the Pontic lyra at WOMAD music festival in Reading (England 2001 & 2005), WOMEX music festival in Rotterdam (Holland 2001), Roskilder Rock festival (Denmark 2002), in Teatro Massimo for UNESCO (Palermo Opera House, Italy 2002), at the Royal Albert Hall (in a Charity concert for the children of Afghanistan, London 2002) and at the Purcell Room in London's Southbank Arts Centre. 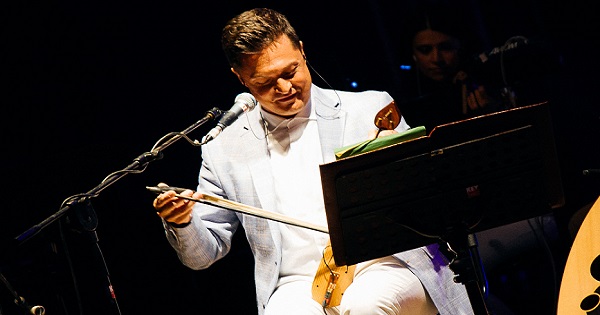 He performed the Pontic lyra for BBC Radio 3 as well as many other BBC radio programs. In August 2004 he performed the main music theme of the BBC for the Olympic Games of Athens with the opera band Amici and Prague Symphony Orchestra. He has also collaborated with Ostad Ardeshir Kamkar on the Persian kamancheh in Tehran (2004). In 2005 he performed at the Herodus Atticus Theatre in Acropolis, Athens, accompanied by the ERT Contemporary Music Orchestra in the opening ceremony of the Athens Festival and in June 2005 performed the Oratorio Kosmas o Aitolos by Mimis Plessas in Veria, Greece.

In 2006 Tsahouridis was the co-artistic director of the opening ceremony for the International Byzantine Congress of London with Lady Marina Marks as Chairman and Prince Charles as patron. In 2007 he performed at the London Porchester Hall (Bayswater) with Cat Stevens (Yusuf Islam).

Tsahouridis has likewise shown a great interest in other stringed musical instruments. He is also adept at the violin, laghouto (Greek lute), oud, the Greek bouzouki, guitar, the Persian kamancheh, the Afghan rubab as well as the Afghan and the Uzbek ghichaks. Having participated in many music concerts and recordings he has managed to put forward a personal statement over the musical tradition he embraces and to which he has devoted his life.

Tsahouridis has inspired many young people to learn to play the Pontic lyra - both in Greece and Turkey where it's mainly played - but also worldwide. That, along with his many accomplishments and accolades, places him in very high standing, and has proven beyond little doubt, that he has served the music that he loves, quite comprehensively.

Tsahouridis performing at an outdoor festival in Turkey, 2010.