A History of Bafra, Pontos 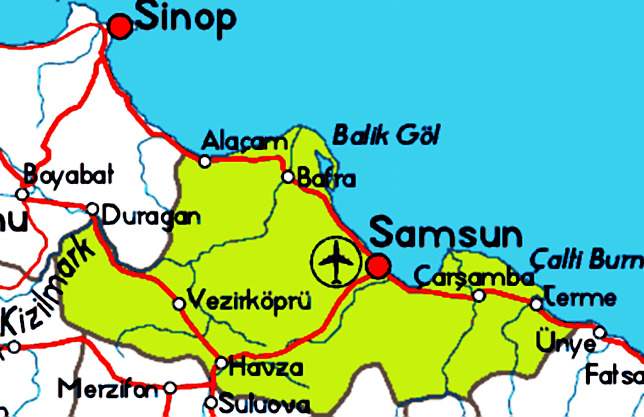 Introduction
This paper briefly describes the history of Bafra in Pontos[ Greeks call the north-east corner of Anatolia adjacent to the Black Sea, Pontos. Pontos is one of the most distinct regions of Anatolia (modern day Turkey). ], which is located nearly 20 km from the Black Sea and 52 km north-west of Samsun in northern Turkey (Figure 1). It covers the period up to the compulsory Exchange of Populations with the exodus of Orthodox Greeks from Turkish territory to Greece under the 1923 Lausanne Convention.

The town of Bafra, which was reported to have approximately 88,000 people (2014), is sometimes ‘overshadowed’ by nearby Samsun—the largest city on the Turkish Black Sea coast with over 540,000 people (2014)[ http://population.city/turkey/ ]. Bafra’s average annual precipitation is 700 mm and the Kizilirmak River flows north on the western edge of the town. The area around Bafra is agriculturally rich with most inhabitants involved in farming such as wheat, corn, tobacco, sugar beet and rice. Tobacco is the major cash crop.[ Abdurahman (2016). ]

Early Settlement
The prehistoric site of Ikiztepe is located 7 km west of Bafra and was settled from the Early Chalcolithic period [5500–4500 BC] to the Early Hittite period (c. 1700 BC). The site contains a large cemetery comprising 700 human burials. Radiocarbon dating suggests the cemetery was used between c. 3500–3000 BC. Many copper-arsenic alloy objects, such as spearheads, daggers, harpoons, hooks as well as gold and silver rings, earrings, amulets and pendants were found with the burials.[ An alloy of copper and arsenic significantly enhanced the mechanical properties of copper. Bronze (made of copper and tin) seems to have had no mechanical advantages over this alloy of copper and arsenic. Fortunately, this alloy could have been produced from local ores. Bronze could have been used for prestige goods, since bronze [when polished] resembled gold (Düring 2011). At Ikiztepe, because tin had to be transported over a long distance, bronze would have been more expensive to produce. ] The settlement may have been located on the edge of the Black Sea when it was settled.[ Welton (2012); Skourtanioti et al. (2020). ] At the site, houses seemed to have conformed to a rough square or rectangular plan usually with an anteroom and with fixed clay hearths set into the floors.[ Sagona and Zimansky (2009). ]

The Late Iron Age settlements (c. 650–500 BC) at Ikiztepe had come to an end before the arrival of the Greeks.[ Atasoy (2018). ] In fact, the Greeks had explored the Black Sea as early as the 8th century BC and before they established settlements there. Amisos (modern Samsun) was settled by Greeks ‘around’ 564 BC, but there were indigenous Anatolians already living there.[ Tsetskhladze (2006).]

The indigenous Anatolian sites in the Kizilirmak River basin prove that the Greeks had contacts with this region long before the foundation of their coastal colonies.[ Summerer (2007). ] The area around modern-day Bafra was fertile and Greek colonists settled there sometime after Amisos was settled. Although the Greek army of Alexander the Great (reign 336–323 BC) did not march north of Ankara to conquer northern Anatolia near the Black Sea, this area eventually accepted his authority.[ Şerifoğlu and Bakan (2015). ] In the Hellenistic Period [323–31 BC], the area around Bafra was heavily settled, mainly to exploit the mineral resources.[ Atasoy (2018).]

The Mithradatic Kings & the Romans
After the death of Alexander the Great in 323 BC, Mithradates I [reign, no later than 302–266 BC] established the independent kingdom of Pontos. The Mithradates kings ruled over much of the Anatolian Black Sea coast and beyond especially under the last king, Mithradates VI (reign 120–63 BC).[ Erciyas (2001). ] After the defeat of Mithradates VI by the Romans, the region eventually became directly part of the Roman empire.[ http://www.ehw.gr/asiaminor/forms/fmain.aspx?lang=el-GR ] Later, it became part of the Byzantine (Eastern Roman) empire.

The Roman station of Helega, probably located on or near the mouth of the Kizilirmak River, to be succeeded by Paurae (modern-day Bafra). The exact location of Paurae is uncertain, but may have been on the banks of the river with a harbour.[ Bryer and Winfield (1985).]

Paurae is first mentioned by Anna Komnene in an account of an event in 1101 when the site was in Byzantine hands. Alexios and David Komnenos of Trabzon took the district in 1204–1205, but it must have fallen with Sinope [to the Seljuk Turks] in 1214. In c. 1277, it formed part of a Mongol Seljuk Turk fief. This area was then settled by Turkmens.[ Bryer and Winfield (1985:91).]

Rise of Bafra and Samsun
After 1452, Samsun declined. By at least 1460, Bafra came under Ottoman Turk control.[ Yeşilirmak River basin Development Union (2010). ] Bafra and Samsun did not begin to regain economic importance until the 19th century.

In 1836, the local Greek priest believed that Bafra contained 1,160 houses of which 1,000 were Turkish, up to 110 Greek and 50 Armenian.[ Hamilton (1842).] In 1846, Bafra was producing large amounts of tobacco with over 1.8 million kg. By the 1860s, Samsun and Bafra were little more than small settlements. The revival of Samsun began with the building of a highway south to Amasya (1862–1883) and with the extension of the tobacco industry of nearby Bafra. The rise of Samsun’s and Bafra’s Greek (with some Armenian) control of local businesses and of the tobacco market became almost exclusive. However, the massive increase in the Greek population owed more to immigration, especially from western Anatolia and Istanbul rather than from Pontos. In 1896, 73% of the 214 businesses in Samsun were Greek. The Greeks also controlled 60% of the Bafra tobacco market.[ Bryer (1970); Bryer and Winfield (1970). ]

According to the 1910–1912 register of the Greek population in Northern Anatolia population (conducted by the Greek consular authorities in the Ottoman empire in cooperation with the Greek Orthodox ecclesiastical authorities in Anatolia), Bafra kaza [county] reported 27,410 Greeks, while Samsun kaza reported 76,380 Greeks.[ Alexandris (1999:64). ] According to Maccas’ population figures for 1911 [assuming they are accurate enough to be used for comparative purposes], the kaza of Samsun had an absolute Greek majority (over 60%) while in the kaza of Bafra, around 40% of the population may have been Greek [my adjusted figure allows for Maccas’ Greek population figure for Bafra being replaced with a lower and more accurate Greek population figure[ Alexandris (1999). ]]. There were also 91 Greek churches and 108 Greek priests in the Bafra kaza.[ Maccas (1919:83; 108). ] In addition, there were 179 Pontic Greek villages in Bafra[ Samouilidis (1992)], (probably in the Bafra sanjak, i.e. within the larger Turkish district).

Deportations
1915–1917
In 1913–1914, it appears there were 2,035 Armenians in the kaza of Bafra.[ Hewsen (2009). ] The head of the kaza of Bafra was murdered after he tried to prevent the Armenians being deported in 1915 by the Ottoman Turks during the Armenian genocide.[ Kévorkian (2011). ] The German consul at Samsun reported in July 1916 to Berlin that ‘exile and extermination has the same meaning for the Turks because whoever is not murdered dies of hunger and disease’.[ Psomiades (2006). ]

After April 1916 (during World War I), when the Russian army occupied north-eastern Anatolia, thousands of Turks fled westwards. The Ottoman Turk authorities announced that wherever Orthodox Christians failed to report for military service (i.e. to join the unarmed labour battalions) or deserted after joining up, their whole community would be held responsible. This provided an excuse for a first round of village burning by the Turks and that, in turn, initiated retaliation by Christians.[ Clark (2006:73).] Many Greek adult males from the Samsun-Bafra area joined the mountain guerrillas.

In late 1916, the Ottoman Turks ordered the deportation of the Greek population from the Black Sea coast, who were not under occupation by the Russian army in the east to an area away from the Russian front line.[ Hofmann (2011).] A letter dated 7 February 1917 by Germanos, the Greek metropolitan of Amasya in Pontos, stated: the evacuation of Bafra occurred on 5 February 1917. ‘This week another 16 villages were burned: eight near Samsun and eight in Bafra’.[ Fotiadis (2019:240). According to Christos Andreadis: the battle of Nebiendag was conducted in the south of Bafra in the cave of Panagia the Eye-Healer. A few Greek men took up arms to defend the cave, defending 600 Greek women and children against the Turks. Towards the end of 1917, a Turkish battalion shelled the cave for two days. Having run out of ammunition the men committed suicide. Only 83 women and children managed to escape (Fotiadis 2019:207). ]

1919
By late January 1919 (after World War I), between 10,000 and 40,000 Greeks, (who had survived the deportations) had returned to Samsun and Bafra. Many of them were living in mud huts and in the street, being prevented by the Turks from occupying their former homes. Some Bafra Greeks were even killed trying to regain their homes.[ Morris and Ze’evi (2019). ] The Pontic Committee of Istanbul stated that in May 1919:

The Greek population is being murdered systematically around Samsun and Bafra by the Turkish guerrilla forces, backed by the government …[ Fotiadis (2011–12). ]

Although the Pontic Greek guerrillas who carried out raids on Turkish villages or Turkish military groups, sometimes in reprisal for killings by the Turks, were not a significant military force[ Shenk and Koktzoglou (eds) (2020). ], they were an annoyance to the Turks. They were essentially a defensive force, lacking arms, ammunition and equipment; they also lacked sufficient food and medicine for themselves and the large number of women, children and the elderly in their care. Their survival was dependent upon hit and run tactics against Turkish forces.[ Psomiades (2006). ]

1921
The forced deportation of Greeks from Bafra from mid-June to the end of September 1921 included 14,010 men, women and children deported by the Turks during this phase of the Greek genocide. At least 9,140 Greeks (at least 83%) of the deported Greeks were murdered either directly or by starvation or disease.[ Gavriilidis (1924) in Hionides (1996) and Morris and Ze’evi (2019:408).]

It is important to remember that in September 1921, many local Turks tried unsuccessfully to stop these deportations.[ Shenk and Koktzoglou (eds) (2020). ]

1922
After the harvest in 1922, there were more killings against the unarmed Greeks in the regions of Samsun, Bafra, Erbaa and other areas in which guerrilla bands operated. The situation became worse in October 1922, when Kemalist General Liva Pasha returned victorious with his army from western Anatolia to Pontos after the end of the Greco-Turkish War 1919–1922. In November 1922, 10,460 Christians from the area of Samsun (including Bafra) were deported by ship beyond Ottoman borders.[ Fotiadis (2019). ]

The Evacuation of 1923
After the defeat of the Greek army in western Anatolia at the end of August 1922, the Kemalists began forcing Greeks to leave Anatolia. The signing of the Lausanne Convention in January 1923 brought into effect the compulsory population exchange of Orthodox Christians from Turkish territory to Greece and a much smaller number of Muslims from Greece to Anatolia. The remaining Pontic Greeks, including many from Bafra (who had not already left Anatolia in 1922) began trekking to the Black Sea ports to leave their homeland.

In March 1923, the American Near East Relief Organisation provided aid to 9,000 refugees in Samsun. Another 4,000 received no aid.[ Under its supervision, most of the Samsun refugees were vaccinated and deloused at least once. In spring 1923, missionaries cut the refugees’ hair, deloused clothes and effects, washed scalps and gave refugees hot baths. American naval officers on gunboats on the Black Sea often helped refugees’ passage aboard Greek, British, Russian and Turkish steamships (Morris and Ze’evi 2019:462–463). ]

In April, embarkations were impeded due to the high fees of passage and Greece’s momentary unwillingness to take in more refugees. Greece was already hosting more than a million refugees and would not take any more until Muslims departed Greece.[ Morris and Ze’evi (2019:463; 465). ] [ Nearly 52,000 Christians left the Samsun region as part of the population exchange (Aydan (2016); Çomu (2012)).]

Conclusion
Bafra had a chequered history up to the 16th century when it came under Ottoman Turk control. It did not become economically important until the 19th century with Greek and some Armenian businesses dominating Bafra’s and nearby Samsun’s economies. In the early 20th century came the genocide of Christian Greeks and Armenians in Anatolia. The end of Christian Greek occupation in Pontos effectively came in late 1922 and in 1923 with the forced Exchange of Populations when Christians moved from Turkish lands to Greece.

Acknowledgements
I thank Michael Bennett and Russell McCaskie for their comments to an earlier draft.