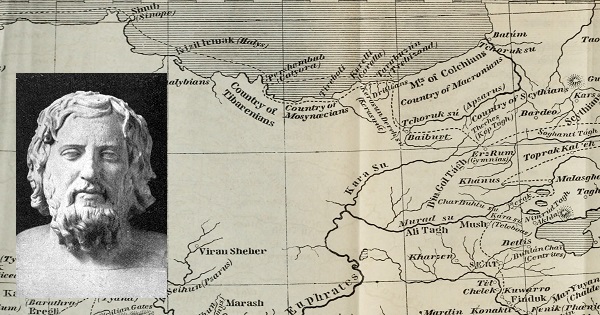 As a result, the Greek mercenaries were forced to retreat the long distance to the Black Sea on their way back to Greece. During their retreat from Babylon, the army’s five Generals were killed by the Persians and Xenophon was elected one of the two new Generals.

After they crossed the Pontic Mountains in north-eastern Anatolia, the Greeks did a 3 days’ march of 48 kilometres through the country of the Macrones. On the first day they came to a river which formed the boundary between the territories of the Macrones and the Scytheni (probably around modern Machka, south of Trabzon). The Macrones, armed with shields and spears opposed the Greeks at the crossing-place. Amazingly, one of Xenophon’s mercenaries (who had been a slave in Athens and could speak their language), facilitated their safe crossing of the river. The Macrones led them through their country, until they brought them to the Colchian frontier. The Colchians were drawn up in battle order on the mountains.

A march of 34 kilometres from there brought the 10,000 Greek mercenaries to Trabzon on the Black Sea in 400 BC. Xenophon states that it was a Greek colony of Sinope (located 400 kilometres to the west). Xenophon noted that some local indigenous people were friendly to the Trabzon Greeks while other Colchian tribes [east of Trabzon along the Black Sea coast] were not.

The Trabzon Greeks gave them gifts of oxen, wheat and wine and access to buy food. When food became short the mercenaries had to resort to pillaging adjacent areas unfriendly to the Trabzon Greeks. After spending about 30 days in Trabzon, Xenophon’s army moved west along the Black Sea coast. At Trabzon they put on ship the sick, men over 40 years of age, women, children and non-essential baggage. 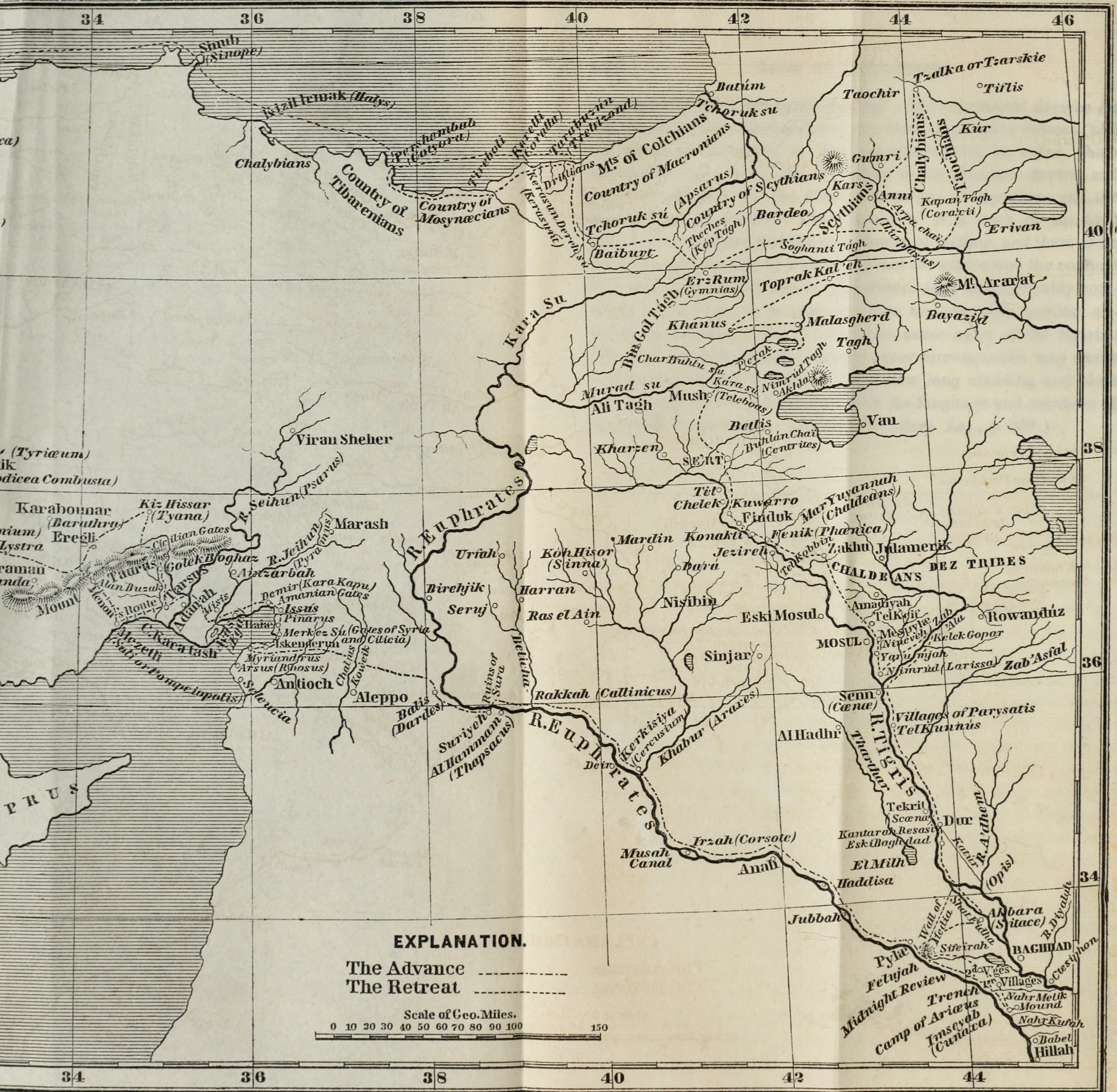 After 3 days of marching they arrived at Kerasous (Giresun), a Greek settlement on the coast which was also a colony of Sinope. The army stayed there for 10 days and counted that they now had 8,600 Greek mercenaries.

The Greeks then marched for 8 days and came to the country of the Chalybes. Most of the Chalybes made their livelihood by working iron, but this small tribe was also subject to the Mossynoeci.

Next, the Greeks reached the land of the Tibareni and they marched on for 2 days until they arrived at Kotyora (Ordu), a Greek settlement and another colony of Sinope. They stayed there for 45 days and took supplies. At Kotyora, the local Greeks closed their gates to the Greek mercenaries. Some Greeks from Sinope arrived to discuss the movement and actions of Xenophon’s mercenaries. They convinced Xenophon and the mercenaries to board ships for their travel further west. The up to 8,600 soldiers (and others) boarded ships and soon they anchored at the port of Sinope. (There must have been many ships.) The soldiers stayed 5 days.

They set sail along the coast for 2 days, arriving at Heraclea, a Greek colony of Megara in the territory of the Maryandyni. The people of Heraclea sent gifts of 4,000 bushels of barley-meal, 2,000 jars of wine, 20 oxen and a 100 sheep to the mercenaries.

This was not the end of their adventures in Anatolia before they left for home. But they had now passed through Pontos.