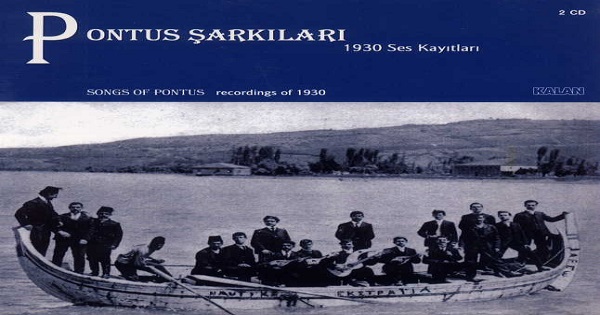 Pontus Şarkıları (The Songs of Pontus) is a double CD set containing over 60 Pontic songs. The anthology was recorded in Athens, Greece in 1930 by Melpo Merlier. The musicians are all refugees from Turkey from the historic region of Pontus. The songs are in the Pontic Greek dialect many of them accompanied by the kemence, the tulum (bagpipe) or the gaval (flute).

In the introductory notes, Markos Ph. Dragoumis says the following about the CD:

Listening to this double CD, one cannot hide ones admiration for all participants, both singers and instrumentalists. Not only do they possess rare vocal qualities and an exceptional virtuosity, but are also stirring interpreters of their deeply compassionate music. And our admiration becomes stronger upon the realization that some of them play and sing simultaneously, or talk, sing and weep with the truth and persuasiveness of a highly gifted actor. This art could become a starting point for the modernisation and renewal of speech expression in ancient Greek tragedy.

Included in the CD are songs and dance tunes played and sung by first generation Pontic Greeks, the way they were played in their homeland. Included are lamentations, a lullaby and other theatrical and emotional speeches. A few popular tunes include: