An Introduction to Pontic Greek History 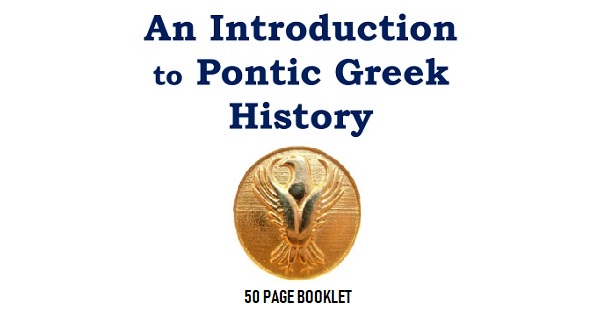 This booklet is a brief introduction to Pontic Greek history for those who are not interested in reading detailed work on this topic.  My aim is to produce  a  well-researched  work  in  English  on  Pontos  to  pass  onto  our youth.    In  this  booklet  I  use  the  word  ‘Pontic’,  the  academically  accepted term in English for people from Pontos.  All the many academic references are included at the end of the booklet.

My many more detailed articles on Pontic history and culture can be found   at   least   on   the   excellent   PontosWorld   website   at: <www.pontosworld.com/index.php/history/sam-topalidis>.      My   book, Topalidis (2007), A Pontic Greek History, can be found in some libraries.  I have referred often to the landmark research by Professor Anthony Bryer, the  great  doyen  of  Pontic  History.    For  those  who  can  read  Greek,  I recommend the excellent work by Dr Vlasis Agtzidis.

In  this  booklet,  the  first  three  chapters  give  an  outline  of  who  are Pontic Greeks, where they came from and where they were relocated.

Chapters eight  to  12  describe  five  of  the  many  famous  former churches or monasteries in or around Trabzon which I visited in 2018.

Chapter 13,  on  ‘The  Pontic  Greek  Dialect’,  describes  when  Pontos became  isolated  from  other  Greek  speaking  areas  its  Greek  language maintained many old characteristics which have now been lost in Demotic Greek.

Chapter 14,  ‘Trabzon  Metropolitan  Chrysanthos’  describes  the  man who  protected  his  Greek  flock  but  who  also  assisted  Turkish  refugees during World War I.

Chapter 16  summarises  the  significance  of  the  Greek  Crypto-Christians.    These  people  were  openly  Muslim  but  maintained  their Christian beliefs at home.

Chapter 17  briefly  describes  the  Pontic  ‘Family  History  of  Sofia Dimarhos’.  What a story!  I warmly thank Sofia for allowing me to interview her several times and for the extra weight I gained as she force-fed me.

The final chapter, ‘Where to From Here?’ points us to what we can do to foster Pontic history and culture for the coming generation.

We should be in awe of the courage shown by our Pontic ancestors in defending their families, their Christian religion and Greek culture.  They were  great  survivors.    May  we  stand  upon  their  shoulders  so  we  can  see further.