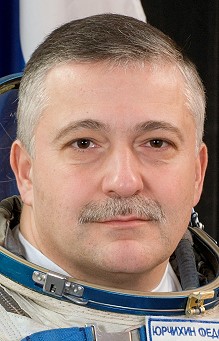 Fyodor Yurchikhin is a Russian cosmonaut of Pontic descent. He was born on the 3rd of January 1959 in Batumi, Autonomous Republic of Ajara in Georgia. His mother and father reside in Sindos, Greece. His hobbies include collecting stamps, space logos , sports, history of cosmonautics and the promotion of space. He also enjoys reading history, science fiction and the classics.

1983- Finished studying and qualified as a mechanical engineer specialising in airspace vehicles.

2001 - Graduated from the Moscow Service State University with a Ph.D in Economics.

Sep 1983 - Aug 1997 - Began working as a controller in the Russian Mission Control Center, and held the positions of engineer, senior engineer, and lead engineer, eventually becoming a lead engineer for Shuttle-Mir and NASA-Mir Programs.

August 1997, Enrolled in the RSC Energia cosmonaut detachment as a cosmonaut-candidate.

November 1999 - Qualified as a test cosmonaut

January 2000 - Started training in the test-cosmonaut group for the ISS program.

2007  - Became a member of the Expedition 15 on the ISS. His flight began on April 7, when he launched from the Baikonur Cosmodrome, aboard Soyuz TMA-10 spacecraft, together with Oleg Kotov and space tourist Charles Simonyi

At 19:05 GMT on 30 May 2007 Yurchikhin and Kotov began a 5 hour and 25 minute spacewalk, during which they installed protective panels to shield ISS from space debris. This spacewalk, which lasted 5 hours and 25 minutes, was his first.

STS-112 Atlantis (October 7-18, 2002) launched from and returned to land at the Kennedy Space Center, Florida. STS-112 was an International Space Station assembly mission during which the crew conducted joint operations with the Expedition 5 by delivering and installing the S-One Truss (the third piece of the station's 11-piece Integrated Truss Structure). Three spacewalks were required to outfit and activate the new component. The crew also transferred cargo between the two vehicles and used the shuttle's thruster jets during two maneuvers to raise the station's orbit. STS-112 was the first shuttle mission to use a camera on the External