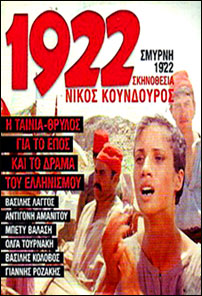 The film Smyrna 1922 by Nikos Koundouros was made in 1978 and is the movie adaption of the book titled 'Number 31328: The Book of Slavery' by Elias Venezis which details the mistreatment of Ottoman Greeks by Kemalist Turkey in 1922. The film unfolds through the personal tragedies of 3 characters. The wife of a merchant, a teacher and a 17 year old boy. In the death marches which ensue, the teacher will be murdered by a Turk, the wife of the merchant will lose her senses, and only the young boy will survive.

Elias Venezis was born Elias Mellos in 1904 in Ayvali, Asia Minor. The Mellos family fled to Lesbos (Greece) during the First World War to escape persecution but returned to Ayvali in 1919 after the Greek Army landed it's troups in Asia Minor following the Great War. Venezis graduated from high school in Ayvali but immediately afterwards was taken hostage by the Turks and sent to work in forced labour batalions (Amele Taburu). In his book, he describes the conditions he was forced to endure during that time. Of the 3000 men of Ayvali sent to the labour batalions, only 23 survived.  One of those was Elias Venezis.