The Genocide of the Greeks in Turkey

THE GENOCIDE OF THE GREEKS IN TURKEY 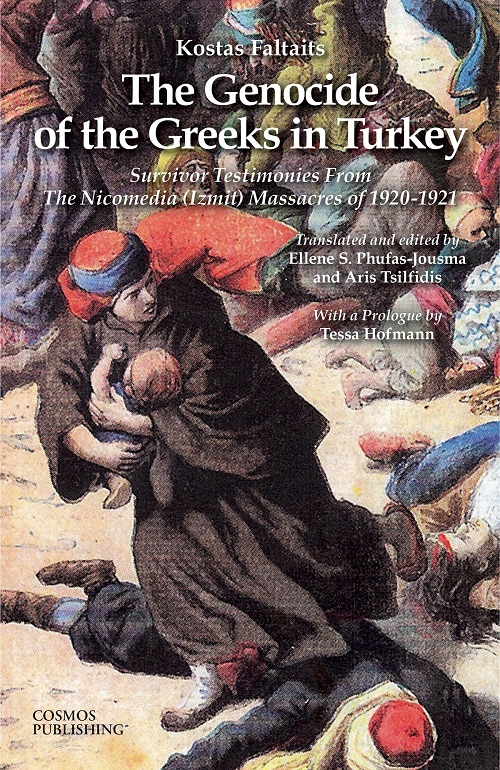 SURVIVOR TESTIMONIES FROM THE NICOMEDIA (IZMIT) MASSACRES OF 1920-1921.

The Izmit Massacres of 1920-21 were a series of massacres perpetrated by Kemalist forces on native Greek communities in the region east of Istanbul historically known as Nicomedia (today İzmit). According to one report, at least 32 Greek villages were looted or burned in this region between 1920-1921 and more than 12,000 Greeks were massacred.

In 1921, while following the movements of the Hellenic Army in Asia Minor (today's Turkey), journalist Kostas Faltaits came face to face with the survivors of these massacres and collected their eye-witness accounts. Upon his return to Greece in late 1921, Faltaits compiled and published the testimonies in Greek. Now, almost 100 years later, the testimonies have been translated and are available to read in English giving readers a chance to learn more about the methods the Kemalists were using to annihilate Turkey's Christian minorities in the  north-western regions of Asia Minor. The English edition includes a prologue by distinguished historian Tessa Hofmann who puts the atrocities into their correct historical context.

The testimonies describe the disarming of Christians, racketeering, the mass burning of civilians in their churches and homes, the rape and sexual torture of women, and males, and killing of one's own children. The book also includes the testimony of the Armenian Metropolitan of Nicomedia, Stephan Hovakimian.

Pontic Greeks will also find the book interesting because one of the chapters is dedicated to the Greeks in a region of Nicomedia called Karasou. There were 14 villages in Karasou inhabited by Greeks who had emigrated from Pontus during the 19th century.  Another town mentioned in the book is that of Ada Pazar where many Pontic Greeks lived.

The accounts by Greek survivors in The Genocide of the Greeks in Turkey, of massacres, torture, rape, theft, and the destruction of villages, and the brutalizers' sheer pleasure in inflicting such suffering on fellow humans, attests to the depths to which humans are capable of descending.                    -Thea Halo, author of Not Even My Name.

Kostas Faltaits (1891-1944) was a renowned Greek journalist and author. He was born in Smyrna (today Izmir) but in the same year his family moved to the island of Skyros. He studied Law and Philology at the University of Athens and in 1910 he began a career in journalism.